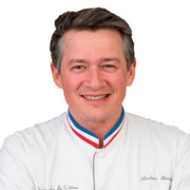 The admired and respected Nicolas Boussin, MOF Pâtissier 2000, discovered his passion for the culinary arts at 16 when he completed a work placement in a pastry shop in Chantilly (France). Head-hunted by the best pastry shops in Paris, he learned decorating techniques and artistic pastry alongside great chefs. At that time, he also acquired a taste for innovation and originality.

At only 22, he was put in charge of the dessert preparation at the Michelin-starred restaurant, Toit de Passy (Paris). His next destination was Belgium, where he even created decorations for the monarchy, then New York, and again France. He has been a media personality since 2001 thanks to creations such as his unique Gâteau.

He has been the executive pastry chef at the Maison de la Crème Elle & Vire since 2014. Some of his non-negotiable values ​​are rigor, simplicity, and maximum respect for tradition.

“I think about a classic recipe and when I want to change the design, I always try to understand why this recipe became famous”