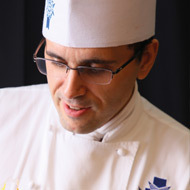 Nicolas Belorgey is part of that breed of nomadic French chefs who have left their homeland, in this case Burgundy, to go on different adventures in places as diverse as the United Kingdom, Australia, or Taiwan. Although the eagerness to know new territories and cultures have accompanied him in this journey, the Le Cordon Bleu professor is also proud to be an ambassador of French savoir-faire in terms of haute pâtisserie. He defines his creative style by comparing each creation with a book which must seduce from the cover (the presentation) until you enjoy its interior (the tasting).

Each creation is like a book, it must be attractive from the cover to the last page.

Overall, I tend to give top priority to textures and I like contrast to be both seen and felt