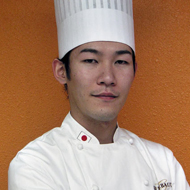 Winner of the prestigious World Chocolate Masters competition in 2007. Professor at the Futaba Confectionery College in Tokyo.

At the early age of 28, he won the prestigious World Chocolate Masters competition held in Paris by Cacao Barry, Callebaut and Carma.
Mizuno obtained an intense professional training, which started in the year 1997 at the bakery Noe in Tokyo. Four years later, he totally immersed himself in the world of restaurant working at Parisienne in the Japanese capital, and then traveled to France to become part of Michel Galoyer’s team, first at Le Grenier à Pain (Paris) and afterwards at Le Trianon (Angers). Back in Japan, Naomi Mizuno starts his work as a professor at the Futaba Confectionery College in Tokyo, where he currently works. Besides being a teacher, he is also ambassador for the firm Callebaut.

Featured in so good #1