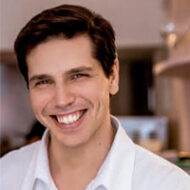 The Argentianian chef Mauro Pompili forges his culinary foundations in his country of origin but soon felt called to broaden his horizons. He traveled to Europe and visited some of the most famous houses in Paris, London, and Barcelona. After significant experiences with chefs such as Gordon Ramsay, Alain Passard, or Ramon Morató, and strongly influenced by Josep Maria Ribé, he is encouraged to set up his own dessert restaurant in a very cosmopolitan place as New York. Marble Dessert Bar is the personal proposal that, alongside his partner Maya Sittisuntorn, brings together global influences, culinary touches of all kinds, and lots of design to display a complete and varied dessert menu.