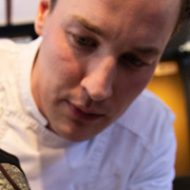 If design as a discipline has something to do with food, surely Maurits van der Vooren was part of the collective of chefs who contributed to this. Trained as a chef and with significant experiences in different Michelin-starred restaurants in the Netherlands, especially in the restaurant Latour, he had not stopped throughout his career to train and learn with stages in restaurants such as La Vie the Thomas Vuner or VedPme of Jochem Wissler. He had also collaborated with food companies which are especially anxious to develop concepts linked to design, as is the case of the chocolate maker Dobla. Since 2017, he directed his own consulting firm, Fooddesign by Maurits Van der Vooren, where he carried out teaching work in different schools around the world, and special orders such as the one that brought him to the pages of so good with his colleague and friend, Bart de Gans. Unfurtonately, last 2021 March he passed away after fighting cancer for two years.

“You have to create everything, not only the product itself or the format and presentation, but also the concept that gives meaning to each proposal”