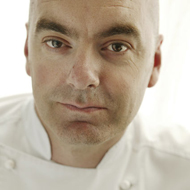 Multidisciplinary chef, he develops his own view of desserts in his restaurant Marque in Australia.

The value of perseverance is ever-present in Mark Best’s career as a chef. Although he started as an electrician, he ended up in a kitchen, and now he is one of the major culinary figures in Australia, leading his restaurant Marque. His never-ending dissatisfaction (as he defines himself) and his perseverance have proven to be key elements all along his professional career. He conceives his desserts as part of the menu, and likes to link them to it by, for example, including traditionally savory ingredients. In his dishes, nothing is superficial, everything has a meaning.

The techniques must be hidden, as I want the ingredients to shine and not be overshadowed by technical gimmicks. It is all about the ingredient and the dishes, not my ego

Featured in so good #3