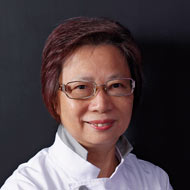 The Institution of Chinese Pâtisserie

In a moment of transition towards new possibilities of expression between the traditional Chinese and European influences, Louisa Ho is playing an important role in gearing up the evolution. Whether it is due to her institutional role as president of the guild of bakers of Hong Kong, or due to her long professional career, the path ahead that she has blazed is exercising considerable influence upon her compatriots in a pâtisserie that is being redefined.

The Hong Kong Bakery and Confectionery Association is an institution that brings together a group of professionals concerned about the future of pâtisserie. Ho also manages the magazine of this association, Today’s Baking, which is not only distributed in Hong Kong, but also in continental China and in Taiwan, and so it has a privileged view of all that happens in the Chinese sector .

China is open to the world and now accepts western techniques and influence.