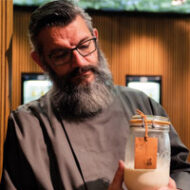 At the age of ten, he knew that he wanted to be a pastry chef. When he finished his training as a baker, pâtissier, chocolatier, glacier, and confiseur, he worked for six years in a pastry shop in Brussels. In 1994, he started working at Puratos as test bakers in the laboratory, and there he discovered  sourdough. He gave demonstrations at an international level until an allergy to flour forced him to change his activity and he devoted himself to theoretical training. In 2008, he became the manager of the new Center for Bread Flavor and since 2013 he has been the librarian of the Sourdough Library in Sankt Vith (Belgium), traveling the world in search of ancient bread traditions and recipes, and keeping the sourdoughs in the library.