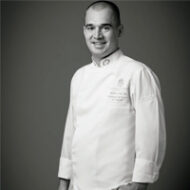 He is in charge of the creative part of one of the great Parisian pastry brands, Dalloyau. Jérémy Del Val felt called by the pastry trade from a very young age and has focused his entire career on studying cuisine and gaining experience in great restaurants and hotels around the world. One of his greatest milestones was the victory in the Championnat de France des Desserts in 2014. In fact, it was shortly afterwards that he entered as a creative chef in Parisian patisserie. In the words of the chef himself, he likes to maintain certain codes of ancestral pastry and bring a touch of modernity to the presentation and adjustment of the ingredients.