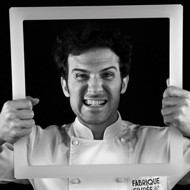 Jérémie Runel is willing to do everything to renew the traditional French ice cream cup based on the philosophy of the plated dessert, with very gastronomic flavors and unusual combinations: orange blossom and Medjool dates; pink grapefruit and juniper berries; mango and Madras curry; pineapple, banana, and lemon. Alongisde two childhood friends, he founded La Fabrique Givrée, an ice cream shop with large terraces in three French premises, located in Lyon, Aubenas, and Uzès.

Although the ice cream cup format is emblematic in this ice cream shop, Runel has taken advantage of his pastry training with great professionals such as Christophe Adam in his time in Fauchon; Gilles Marchal at Bristol Restaurant; and Frédéric Bau in his time as trainer for Valrhona. This has allowed him to explore different presentations for ice cream like the ice cream cake, the glass jars, the ice cream burgers, and the ice cream sablés.

Parallel to La Fabrique Givrée, he has also created, along with Guillaume Ladaviere, a gastronomic design and consultancy company called Studio Toqué. The artistic, design and architectural side is run by Ladaviere, while, logically, the pastry and chocolate side is led by Runel.

We had a very large terrace with a great potential. We had to pose something different so people could taste ice cream sitting calmly