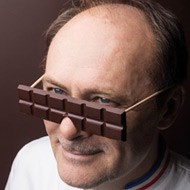 After more than 25 years of experience in chocolate d’auteur, the French chef Jean-Paul Hévin has gained fame and universal reputation. His work exudes an unmistakable style that passionately combines with French tradition, humor, and creativity. One of his biggest contributions is undoubtedly the democratization of high-end impulse products like original chocolate bars. But beyond his extensive range of chocolates and bonbons, this master chef also has an attractive line of cakes, macarons, and what he termed ice cream desserts (desserts glacés), for example vacherins and ice cream bonbons.

A renowned purist of chocolate, he continues to divulge the sensorial richness of a diverse product, in origin and varieties, in his boutiques in France and Asia. When he talks about chocolate he always has an analogy with the world of wine and the truth is that in his chocolatiers he has been very concerned about special furnishings, inspired by the “cave” of wines, designed to preserve the maximum organoleptic properties of chocolate.

Being a perfectionist is part of my DNA, it’s who I am, I can’t help it. I am never satisfied with what I do