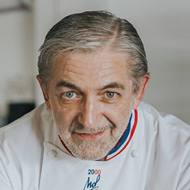 He is one of France’s most reputable pâtissiers. Having been born to a family of pastry chefs, his training and love for the craft led him in 2000 to get the MOF (Meilleur Ouvrier de France) in the mode of pâtisserie Confiserie. For more than 10 years of his career, he served Christian Lacoste in Toulusse until finally becoming one of the most recognizable pastry faces of the mythical Yves Thuries, his sugar museum, and his historical magazine. It is precisely during this stage in which he refines and amplifies his skill with artistic sugar.

After this intense stage, Jean-François Arnaud becomes linked to two centers, the Ecole Nationale Superiure de Patisserie in Yssingeaux and the French Culinary School of Kuala Lumpur in Malaysia. Nowadays it is precisely in the section of training and consulting where he focuses his activity, in addition to offering his services for events as both a pastry chef and as a designer of artistic pieces.

Without love or personal dedication, pastry could never become the luxury product that everyone wants today