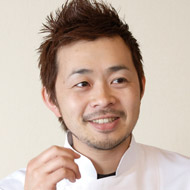 Worldwide, he made himself known to the sector with his outstanding participation in the 2015 World Chocolate Masters final, when he came in second place. He currently works at the “Chef’s corner” of Club Harie in Yokaichi, in Shiga Prefecture. There he turns into dessert some of the emblematic delights of this popular brand of western candies in Japan linked to the Taneya brand. That’s where he has developed his professional career and where he makes his desserts and delights to be eaten immediately.

Pastry chefs must have professional skills for sure, but I also significantly believe in the power of ingredients