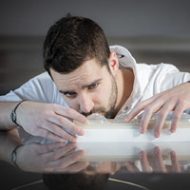 As part of the fourth generation of bakers in his family, French chef Guillaume Schopphoven trained at Les Compagnions du devoir, one of the best vocational schools, and subsequently passing through the most influential bakeries in France before becoming a national and international trainer for Moulin Soufflet.

From the beginning, his goal has been to go a little further, change the perception that the consumer has of the trade and make bakery as beautiful and sexy as pastry is with cube-shaped croissants and many other spectacular creations.

His wish for the future? A bakery that is more respectful with the seasons, with the origin of the products, with traceability, and with the passion of the producers.

“I had only one idea in mind, one goal, make bakery as sexy as pastry”

Vincent Guerlais and Elias Läderach, in the spectacular course calendar of Hangar 78 Guillaume Schopphoven: “I wanted to make bakery as sexy as pastry’”