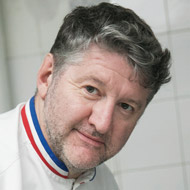 Currently dedicated to consulting and training around the world, Franck Michel won the MOF Pâtissier in 2004, just two years before becoming world champion at the World Pastry Team Championship in Phoenix, USA. Of his career, it is interesting to emphasize his time as head of entremets in Oberweis or, more recently, his work as executive chef in the École Hôtelière of Lausanne, also his dedicated work not only to win important competitions, but to train professionals of different origins in that role. His talents and skills have excelled in both pastry creations in general and with chocolate in particular. In terms of his style, he likes to define himself as classic and contemporary at the same time. Classic due to the influences he takes as a starting point for his creativity and modern by how he updates them.

I have the need to feel the product, to touch it to make it evolve, this is how I best respond to every attempt