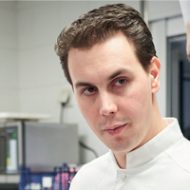 The person in charge of the pastry station at the Grand Hotel du Cap Ferrat Four Seasons, on the French Riviera, is a professional with an intense career despite his relative youth. To his credit he took the victory of the French Dessert Championship in 2010 and also the experience of being a finalist in the pastry MOF.

All this has contributed to forming a demanding, open-minded and friendly personality with genuinely perfect finishes, very much in line with one of the professionals with whom he has shared years of experience in Paris, Claire Heitzler. Today he deploys an uncomplexed pastry which uses large formats and lightened proposals in which the flavors shine clearly, often using many elements such as fresh fruit. In addition to his role as head of desserts at the aforementioned hotel, Florent Margaillan is the author of several books in French and often visits different classrooms around the world giving master classes.

“We are in a very visual era of patisserie, but today we are also living a kind of return to the basics, towards products simply hyper-gourmand, that we feel like biting”