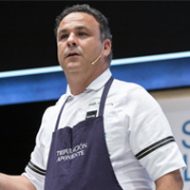 Ángel León is one of the most recognized and avant-garde chefs on the current scene. In his restaurant Aponiente (with three Michelin stars in El Puerto de Santa María, Cádiz, Spain), he is committed to bringing all the unexplored wealth of the sea to the plate, showing that there is a whole gastronomic universe to discover.

Finding sweetness in the sea was one of his great aspirations. After years of searching, together with his head of research and development David Chamorro, he discovered the first sea honey, from an aquatic plant called ruppia maritima that is extracted from the area of ​​the Trebujena estuaries (Cádiz, Spain). A product in which we find bitter notes of chlorophyll, umami, oxidative notes characteristic of molasses honeys, roasted notes as a result of the production process … And at the end that salty background appears.

“It would be beautiful to see that a small industry is generated in the estuaries of the Guadalquivir river thanks to this sea honey, with the help of people who can make a living from all of it.”