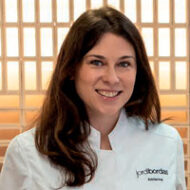 Adrianna Jaworska graduated in pastry from Le Cordon Bleu Kobe in Japan and, thanks to her determination and work, won the “Hautes Etudes du Gout” scholarship awarded by Le Cordon Bleu Paris and the University of Reims Champagne-Ardenne (France). Subsequently, she studied two postgraduate degrees in Food Studies and worked in Japan, Poland, and Spain.

In 2017, Jaworska joined the Jordi Bordas team as director of the R+D+i department, where she develops new products and investigates the connection between science and pastry.