so good.. magazine > Pastry Blog & News > Pastry News > Nestlé will reduce the sugar in their chocolates up to 40%
No Comments

Nestlé will reduce the sugar in their chocolates up to 40%

Nestlé has announced that its scientists have been able to modify the structure of sugar molecules using only natural ingredients, so that even though less chocolate is used, almost the same sweetness is perceived.

By hollowing out sugar crystals, each particle dissolves more quickly on the tongue, which allows the reduction of up to 40% of the total sugar in the chocolate, thus keeping all its flavor. The company will start using this method in one of its chocolate ranges beginning in 2018.

With this pioneering research inspired by nature, Nestlé accelerates its efforts to fulfil its commitment to reduce the amount of sugar in its food and beverages to offer users an offer with flavor and texture, but which is much healthier.

Face-to-face classes are back at l’Ecole Valrhona Brooklyn with an impressive ... June 23, 2021 | Jaume Cot 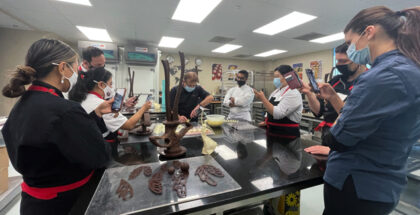