so good.. magazine > Pastry Blog & News > Pastry Chef Articles > Daniel Álvarez: ‘What’s the matter with you? I ask the dough, and it seems to answer me’
No Comments

Daniel Álvarez: ‘What’s the matter with you? I ask the dough, and it seems to answer me’

It is practically a philosophy of life, something that merges with the past, that connects him with his father and what he has experienced since his childhood, but which also projects him into the future, because, as he himself asserts, ‘the current trend is to return to the origin, to the millefeuille for example.’ And why is Daniel Álvarez’s millefeuille famous? It is not just for its exceptional quality, for the fragility and evanescence that characterizes it, although this surely helps, but mainly because it is only available four hours a week in his establishment and in spite of this, it has become his best-selling product.

Daniel Álvarez’s Atelier, Dalua, located on the Spanish Costa Blanca, in the city of Elche, is a place where good pastry and chocolate is worshiped, but above all, it is a place where, as its owner says, ‘moves masses’. They are the main protagonists of the place, either in the form of a piece of pastry, a simple but incredible croissant, or in the form of an exceptional panettone. All these doughs attain a sublime expression in this house and have become its hallmark.

The doughs that reign in Dalua are also the subject of the book that we at Grupo Vilbo have prepared: Sweet Devotion, a contemporary approach to  artisanal viennoiserie. We have been collecting information, preparing photos, and developing its contents for almost two years. An ambitious book mainly because it tries to capture and to reflect something which is seems as simple as a puff pastry (flour, butter and water) but at the same time very difficult to do well. One of the driving threads of this work and of Dalua is something as invisible as it is fundamental: air. Daniel Álvarez explains that the same air that gives us life is what is needed to give the correct development and lightness to, for example, a millefeuille. He is also one of the protagonists of his croissant, an ode to lightness and butter flavor. Mastering this is an art and this is what this chef intends to share in the book. 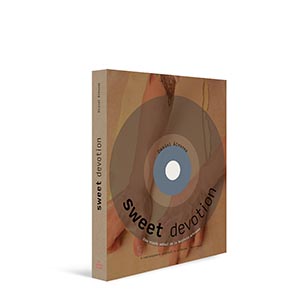 In the following interview, he explains some of the keys to what we can find in his book. We also reveal two of the many creations that will be included and serve as a sample to reflect the importance not only of the recipe, but also of the whole elaboration process and the spirit with which each product is made.

Why a book about doughs?

I read many recipe books, I love them. I also find it great that someone wants to share their recipes, but sometimes I find that there is a lack of information to help me make my own way and evolve. I think I can contribute that in a book like the one we are preparing.

What information related to doughs is missing? What do they ask you the most in the courses you give?
There will be a lot of information that I myself have not written directly, but comes from what I have learned from my students. Sometimes that is where I most evolve. I pass on my experience, but I don’t know everything, and even on some occasions the answer to a question does not come until later through another trainee and his own experience. Many of these questions are not answered with a recipe. If all you get out of a course is a cookbook, in two days you’re going to end up lost.

When you introduce yourself, you often say ‘I move masses’ 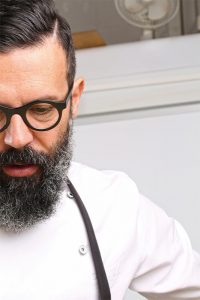 It makes me laugh. It’s from an anecdote with an acquaintance who in an informal chat commented that he was able to move masses (large number of people), and then I said: ‘No, the one who moves masses is me.’ The truth is that I have developed a capacity to know how a dough is just by looking at it. ‘What’s the matter with you?’ I ask the dough, and it seems to answer me, if it’s very hard, very young, etc. I don’t know how I’ve learned it, but it can’t be taught. Over the years, you get passionate and experience it like this. It’s what makes me happy in the morning. If the bakery production goes well, which is what you start the day with, then that day you are happy. If something is wrong, I can’t be happy until the next day when we can rectify what happened. In short, this is what I have dedicated most of my efforts to.

What does the Dalua millefeuille have?

Well, there’s a lot of history behind it, we wanted to make it evolve from the version my father made and little by little we have been implementing changes until getting the one we have today. For me it was an obsession that went so far as to want the customer to eat the millefeuille as I would like to eat it, hence the idea of cooking it just before eating it, on Saturdays and Sundays at noon.
This has generated a lot of ‘hype’, not only because of the quality of the millefeuille, but because it’s only available between 12 and 2. Today, it’s the product that we sell the most. The cold doesn’t even touch it, once it comes out of the oven, it’s mounted with the cream and is sold directly.

“For me it was an obsession that went so far as to want the customer to eat the millefeuille as I would like to eat it, hence the idea of cooking it just before eating it”

It is one of the many products with puff pastry that we can find in your new book.

Puff pastry for me is an underrated product. It’s actually very complex. What happens is that since you make it every day, and in cases like mine is a knowledge that passes from parent to child, we don’t give it the importance it needs. But it’s a very complex product that has hundreds of layers of dough interspersed with layers of butter, all perfectly aligned. For me, the success of the milhojas shows that the current trend is to return to the origin, we leave behind semifreddo cakes with many combinations inside.

Do you think air is also an ingredient to consider in a piece of pastry?

It may not be identifiable as an ingredient but it is fundamental. Air is life, without air we are dead, a piece of pastry with the right air is alive, crisp and light. Without this, it’s a hard, texture-less piece. 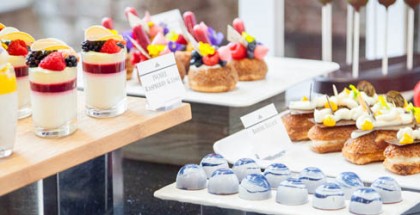 Christmas is upon us. 10 proposals that will surprise us this season... October 28, 2016 | Ana Rodríguez 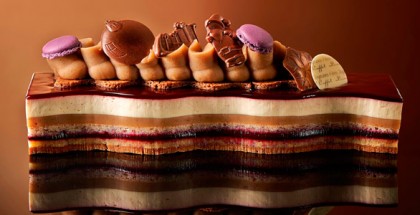