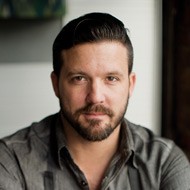 It was while working as a lifeguard and in emergency medicine that William Werner started taking an interest in cooking and began working part-time in restaurants. After spending some 13 years working as a pastry chef at high-end restaurants and hotels, Werner felt ready to do his own Project, Craftsman and Wolves. “In San Francisco, we have this incredible food scene and lush history of amazing chefs and talent,” he says, “but the pastry chefs and bakeries are not involved in it.” That was something Werner wanted to change at his shop.

What I love about cooking is at the end of the day it’s manual labor. It’s very much working with your hands and body. But there’s also a huge amount of creativity, forethought and design that comes into play.