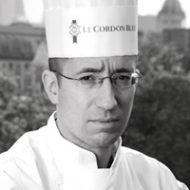 Nicolas Houchet trained in his native Nancy (France) where he forged his base next to illustrious figures such as Jean Claude Hammerer. But it is on his trip to London where he opened his own path and opened a shop with two other Macaron partners that would soon gain the public’s favor in the English capital. He has been part of the Le Cordon Bleu team since 2010, being one of the main pastry teachers of the school on British territory. Along with this professional career there have been trips around the world and participation in different competitions such as the International Festival du Croquembouche or the Uk Pastry Open. It is in the area of competitions where he has been able to show his artistic abilities more widely, especially with caramel.

“I feel very passionate about the skill set needed to execute good patisserie, whether it is piping or garnishing, it’s le geste du pâtissier”