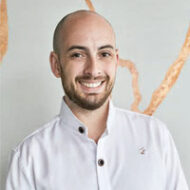 If there is a name that weighs heavily on the foundations, training, and experience of French chef Maxime Gilbert, it is Yannick Alléno, under whom he has worked for several years and shared experiences in different parts of the world. Another defining aspect of Maxime Gilbert’s cuisine is Japan. Although he has not lived there at any point in his life, it is the source and inspiration for at least 50% of his dishes, the other 50% being dedicated to his country of origin, France. The chef at the head of the Écriture restaurant in Hong Kong practices a personal cuisine, which may appear simpler on the surface than it is later appreciated at the moment of tasting. This is the result of a mature career, of the inescapable commitment to tracing a unique path capable of surprising his clients, of betting on large formats aimed at having several diners at the same table share the result of each dish, which is also ideal for the dining room team to finalize the presentations, giving a different value to each creation.

“I believe that cooking reaches its best in large formats, which is why a tart that must then be portioned and shared at a table seems to be ideal, even in a fine dining setting”