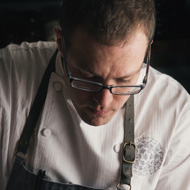 The pastry chef from Single Thread Farms, in Healdsbrug California is responsible for materializing the culinary philosophy of Kyle and Katina Connaughton in the sweet station of the farm, restaurant, and inn. It is no coincidence that this restaurant has garnered great recognition in less than two years (two Michelin stars, One To Watch award from San Pellegrino’s 50 Best) because it is a unique place to redefine what culinary and service excellence means today: Products grown themselves. Matthew Siciliano is influenced by the Japanese philosophy that permeates Single Thread to his proposal and also incorporates the knowledge of a career that has been nurtured alongside figures such as Francisco Migoya, Thomas Keller, and Michael Mina.

Using Kaiseki and other Japanese cuisines as a guide, our goal is to offer desserts that are rooted in Japanese ideals but are Sonoma in character

Ten examples of the possibilities of rhubarb in modern pastry Technique, passion, and generosity in so good #20