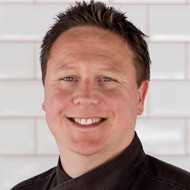 Being from Britain, Darren Purchese trained above all in important luxury hotels. In 2005 he met his wife, the chef and restaurateur Cath Claringbold in Melbourne, and moved to Australia to work as a pastry chef in several restaurants. In 2011 he opened his own pastry shop in Melbourne, Burch & Purchese Sweet Studio, where he offers a colorful cake shop full of surprises, as well as original dessert dinners. More recently, he also sets foot in Sydney, with the opening of a dessert bar inside the modern Australian cuisine restaurant 12 Microns in March 2017. Desserts will be inspired by some of the most iconic cakes in the Melbourne pastry shop.

His pastry is based on a very personal style, a well-understood extravagance, and the desire to open the palate to new experiences. One of the concepts that gives him more room to play is to create versions of combinations of recurrent flavors in his creations in different formats, as well as his most emblematic cakes. Over time he has surrounded himself with a large team of pastry chefs, such as Nichole Horvath, who will travel to Sydney to launch his most recent project, and Christean Ng, who handles all the chocolate decorations of the Sweet Studio’s products.

Purchese added a new book to Sweet Studio: The Art of Divine Desserts, in 2014. Aimed at domestic use, Lamingtons & Lemon Tart goes overs the cakes, desserts, and other creations that cannot be missed in his Burch & Purchese Sweet Studio, such as Explosive Raspberry, Lemon Tart, and Gin & Tonic.

Once a month, his pastry shop is transformed into a glamorous dessert restaurant in which five creations parade full of color and flavor. The Dessert Bar and the modern Australian cuisine restaurant 12 Microns in Sydney will open its doors. Purchese will run this dessert bar with the help of his pastry chef, Nichole Horvath.

I have created an extravagant and colorful universe in which I make versions of my creations in all possible formats.