A few minutes past 7 pm had passed yesterday, when Jean-Claude David and Gabriel Paillasson finally appeared flanked by the jury, commissioners, and the rest of the staff of the organization. Relatives and friends of the six candidates, ice cream makers and pastry chefs from all over France crowded the makeshift room of the CFA in Versailles (a known education center), which a few hours before had hosted the presentation of the six buffets. Following Paillasson’s speech (former president of the Confédération Nationale des Glaciers de France, founder of the World Pastry Cup in Lyon and cofounder of the Ice Cream World Cup in Sigep), Jean-Claude David proceeded to say the names of the new MOF Glaciers 2015, dedicated to Georges Michaud (MOF Glacier 1976). He first announced Nicolas Jordan, who tried in vain to hold back tears. Then it was Jean-Christophe Vitte’s turn, who was also moved in a magical moment for the winners after three intense days of effort and hard work. Contained emotion in any case, or as the French would say “discreet joy” for everything that represents this high distinction, they go on to belong to a lineage of vanguard professionals with great responsibility in transmitting their knowledge.

Before reaching the final, candidates have had to overcome regional qualifying competitions in an obstacle course that has led them to invest three years of their lives training to get the coveted title. Since last Friday and throughout the weekend (20, 21 and 22 February), the six candidates (Jean-Christophe Vitte, Jean Thomas Schneider, Nicolas Jordan, Christophe Bouret, Vincent Boue, and Jean-Luc Kenneally) competed in seven product categories: ice cream macaroon, stick ice cream, ice cream cake, a regional specialty, ice cream cup, a nougatine (nougat) piece, and ice sculpture. The theme was “Versailles: theater of history, garden of kings”. The medals confirming the new MOF Glaciers will be handed out in a ceremony with the President of the French Republic, François Hollande.

We will offer an extensive report on the competition in the next issue of Spanish Arte Heladero. 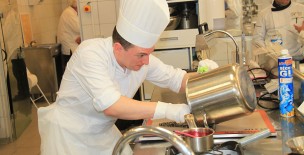 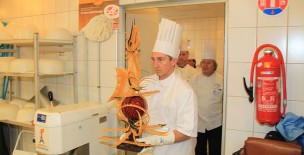 One of the creations made by Jean-Christophe Vitte 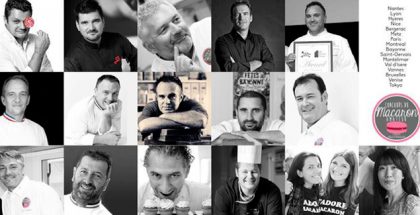 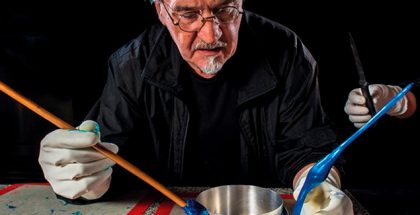