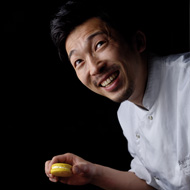 After a brilliant time in Japanese patisseries like Deux Pâtisserie or Pierre Hermé’s Tea Salon in Tokyo, Ryosuke Sugamata decided to open his own establishment in Yoga, Tokyo, under the name of Ryoura. There he displays some of the French specialties that he masters, such as macarons and éclairs. He bets on radically fresh pastry in which the fragrance of seasonal fruits can practically be perceived from the other side of the display case. However, his assortment is not just supplied by seasonal fruit, trying to expand with more personal proposals that can be associated with more than one time of year.

Seasonal fruits remind you what season you are in now visually, but I want people to associate my cakes with more than one season