so good.. magazine > Pastry Blog & News > Pastry Competition > Philippe Segond. ‘For the french, pastry is a full-fledged art’
No Comments

Philippe Segond. ‘For the french, pastry is a full-fledged art’

The 25th edition of the MOF Pâtissier Confiseur counted on the participation of different juries of dozens of professionals, all led by the MOF Philippe Segond, who won the prestigious title in the 1990 edition. Coming from a long line of pastry chefs, he is head of Maison Philippe Segond, with three establishments in the Aix-en-Provence region, in southern France. His last great challenge: to be chairman of the jury for the MOF final. An honor that his companions unanimously granted.

Is it worth fighting so hard in search of recognition as the MOF?
It is through the difficulty of obstacles when one really appreciates the values and victories. The motivation for this effort is very easy, being passionate in a profession as technically complex as ours is. All men struggle to evolve. These have always been the rules of life that apply. This title is proof of the industry’s recognition, a recognition that is credible, valuable and motivating. Being judged by the elite of the profession is an honor and a privilege that any man or woman looking to obtain the Grail of their profession could ask for. ‘A professional judged by the best of the great professionals.’ 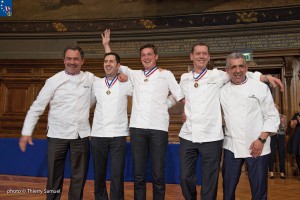 What are the keys to MOF’s success?
The MOF rewards excellence in 238 trades. The title’s requirements lead to only recognizing 225 professionals in this 25th edition, including three Pâtissiers Confiseurs. This exigency is one of the keys.

On the other hand, French gastronomy in general and particularly French patisserie is recognized worldwide. They are the worldwide elite of the profession. Why?
For its historical roots in traditions, customs and the exceptional French territory. These foundations lead French pastry chefs to work in this profession with such passion and devotion, and work to take their professional techniques to levels of perfection. For the French, patisserie is not a model of restoration or a way to celebrate an anniversary, but a full-fledged art: creative, imaginative, original, playful and local. This intellectual and almost spiritual proximity that is the performance of this trade explains why the MOF are requested and recognized worldwide.

After obtaining the title, a MOF has many responsibilities. The MOFs are requested for demonstrations in France and abroad, where the title and our profession are widely recognized; they provide technical advice to companies. A city that has an MOF is proud to have him: he is a model and an example to follow

Why is the MOF held every four years instead of less time?
Organizing an event of this kind, with qualifiers for the 238 trades requires much time and preparation. The themes must be chosen, regional qualifications organized, competition centers prepared, and so on. Besides, considering the difficulty of what is asked of the candidates and the required excellence, three or four years of preparation are necessary to allow them to train and hone their skills. I remember when I prepared for the 1990 edition, I had to prepare with calm and serenity.

What do you find most fascinating in your job?
I love to meet people who are as passionate as me about food. It can be a coffee roaster (like Café St-Henri that we serve and use in our desserts), a fruits producer (like M. Legault and his amazing strawberries and blackberries) or a tea importer like Camellia Sinensis. These people really inspire me in my work.

Who are the ones that judge in the MOF and how do they do it?
There are several different panels of judges. First, candidates must work in front of a jury that assesses performance: organization, cleanliness, calm and mastery of their work. Then another jury tastes the creations evaluating flavor, texture, aroma, execution of the theme or innovative association of flavors. And finally, a third jury analyzes the final presentations, the artistic value or originality. But that’s not all. Human values (which are also associated with sport) such as humility, respect, courage, perseverance, expertise, acceptance of failure to return better afterwards, are all necessary. It is the total and the average of all these things that adds value to a competition like the MOF.
The only people allowed to ‘correlate’ the scores of the three juries are competition’s commissioners, who ensure anonymity. In the end, if we add up the three juries’ decisions, the commissioners and members of the general jury plus the chairmen, results in a significant number of participants.
Keep in mind that after obtaining the title, a MOF has many responsibilities. The MOFs are requested for demonstrations in France and abroad, where the title and our profession are widely recognized; they provide technical advice to companies. A city that has an MOF is proud to have him: he is a model and an example to follow. The new MOF should respond well to all these new responsibilities. This is the reason for the demand and for which each and every one of the requirements that are set for the competition are essential.

For the French, patisserie is not a model of restoration or a way to celebrate an anniversary, but a full-fledged art: creative, imaginative, original, playful and local

Then is originality or excellence valued?
What is valued is excellence in the execution: knowing how to create something ‘very beautiful, very good, and very well done.’ Also valued are the tastings with new associations of flavor, textures and aromas, as well as artistic presentations involving the theme, or the candidates’ innovative and original ideas. But these ideas will always be valued in terms of perfection in their execution.

Why the need to create a partnership that encompasses the MOF Pâtissier-Confiseur?
It is very difficult, even impossible for new generations to be able to understand what a competition of such difficult represents. We were afraid that our necessary professional and human values to maintain the MOF would disappear, either because these values are not well known or because they were ill considered. So we wanted to bring all the MOF pastry chefs and confectioners into a partnership, to provide them with means to beautify and develop the excellent image that the MOF title has. Within this partnership we can organize this competition with human, material, financial and communication means. Who better than an MOF to organize this competition?

Have you changed the level of demand when selecting a new MOF?
The level of demand has always been the same for years and years. The philosophy of this competition is to put professional excellence and savoir faire of our great French artisans forward. They are the ones who should represent our title and our profession worldwide. If a candidate receives the title it’s because he is without a doubt qualified. The requirements are of utmost superiority.

Are there differences between professionals who presented themselves to the competition in the past to those that do now?
None! In fact, the obligations today and in the past are the same. If a professional is not ready they cannot properly present their work. It is important to train a lot to become great. One must always work to enhance their strengths and improve their weaknesses. Also, whether one is an artisan or in any other profession, the obligations also require organization. Only then is it possible to have the means to reach the goal that is set for oneself. So, this competition’s difficulties have always demanded training, preparation and organization for all generations.
It is true that today there are quality raw materials or evolved material means available to the professional. They are tools that, properly used, allow one to reach another level. But the human and professional requirement is the same in 1955 as in 2015 the standards of excellence cannot and should not change no matter what era we live in.

The MOF has gone through a very important historical journey. What changes would you highlight among those who are currently affecting the sector and the competition the most?
Communication! It’s a great change patisserie has experienced. Today the media shows more interest in artisan crafts, and the expertise of those who are engaged in ‘métiers bouches’. It is relatively new for the consumer to see the professional discuss interpretation of new ingredients, spices or essences, for example. We also have the Internet and social networks which have been integrated into our way of life. It is much easier for a homemaker to access the recipes of great pastry chefs.
It is an irreversible phenomenon that changes consumer habits, but not the intrinsic philosophy of our MOF title, quite the contrary. A recipe is shared and is interesting, but knowing how to execute it like a professional, that’s another story.

Two of the three new MOF pâtissiers are not in a workshop, but come from training. Similarly, the two MOF glaciers are dedicated to training. How do you make young professionals attracted to the idea of starting their own pastry shops?
It is true that in view of the difficulty of this competition, there are candidates who prefer to finish their career plan before setting up a shop. Depending on the call for entries, there are more trainers, more artisans, or more employees. There is no regularity. Looking at the call held in 2011, three MOF won the title. At that time, none of three has their own pastry shops, but now two of them do and the third will soon. All great professionals want at one time or another to set up shop and offer their own vision and interpretation of the trade. Despite the financial risks, the passion is stronger.

Although the pastry trade has more and more women, this trend has not yet been reflected in the MOF. Will there be women with the MOF title?
Of course, and soon! At the end of the competition for France’s Best Pastry Apprentice, which we also organize, we MOFs wonder when she will arrive. Practically 50% of candidates of that competition are women. I think we’re going to have, I hope at the next call for entries, candidates who will eventually feminize our title. We need to continue promoting that this craft as beautiful as it is thrilling.

Asian and European patisserie face off at Iba UIBC CUP 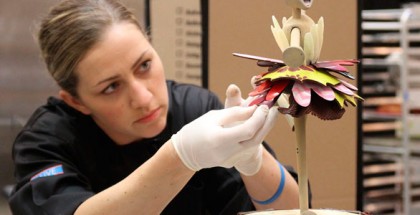 Restaurant pastry, for the first time in World Pastry Stars... May 18, 2016 | Ana Rodríguez 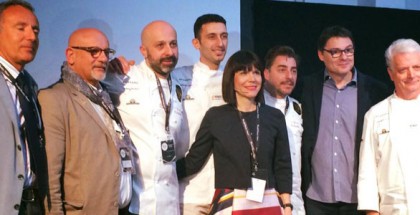